Listen to this topic here:

When I was thinking about launching my first online course, the ‘DIY PR’ one, I went on Instagram and asked my followers what they thought. I said what I was thinking of including in the course. And I got a positive response, so I went ahead and wrote the course.

Then, when it was ready to sell, I returned to Instagram. All those people who’d shown interest, in the comments, got a message saying it was now live. I talked about it in my Instagram Stories, on the grid. And soon, places were selling.

I was offering 10 spaces, as I wanted to give weekly feedback and felt that was a good number to start with. And those 10 spaces sold out in two days. I was overjoyed. And the next month, went for 20 spaces. The following month, 30.

And we’ll cover all this later. But for now, if you’re keen to try selling directly to your Instagram followers, here are some tips, as well as examples for what has worked for me.

You might wonder whether I was able to sell to my followers because I had several thousand. So I’ll start by saying that I’ve grown a following pretty slowly over five years. And when I launched the courses, I had around 5000 followers. If you have 200, that will sound like a lot.

But you’ve probably heard before that it’s not the amount of followers that matters as much as the quality of those followers. As in: how niche the following is, and how engaged they are.

What was good about my following was that it was fairly niche. I’d been talking a lot about freelancing from home as a mum, so people who weren’t into that had moved on and I was left with mostly people who were into the parenting stuff, or the freelance business stuff – and lots were interested in both.

If you are putting out good content on your subject, and your 200 followers are there for that, there’s every possibility you can sell to them. So keep showing up, sharing your great ideas, and do give it a go.

As your follower numbers grow, you’ll have more people to market to and when you hit the magical ’10k’, you’ll get the swipe up link in Stories. This has been useful for me, in terms of selling. Instagram is pretty rubbish for linking away from the site, so this feature really does help.

Prepare people for your sales opening

Rather than going straight in with: I HAVE A NEW COURSE AND BUY IT NOW. It’s wise to start warming up your followers.

I tend to say: I’m thinking about doing a course on selling courses, would people be up for this?

Get the idea in their minds. And then create some content around it – tips, stories. This means by the time sales open, they are ready. People will be excited. Waiting.

With this course, I mentioned that sales would be opening the following Monday and I had people messaging me about it.

I even had a neighbour say: oh, I saw on Instagram you’re opening sales for your new course on Monday. He works in marketing.

If people are interested in what you’re selling, and they should be – if your content is making it clear where your expertise lie – they will want to hear about how you can help them.

Resist the urge to only SELL

Once you have something to sell, and it’s selling via your Instagram followers, it’s tempting to keep reminding them that you have that thing that you sell. Resist the urge to make every post a sales one. I see this done time and time again and people just get bored.

You need to mostly not be selling, mostly adding value to their feeds – see module 1; CONTENT – sharing tips, asking questions, giving ideas for exercises, challenges; things that aren’t just about your online course.

And then when every 10 posts or so you mention your online course, people feel like “that’s okay, it’s not annoying” – because you have given them so much in all your other posts.

That said, in the lead-up to a new course launching, if it has a start date, I think it can work to have a week or so when you’re excitedly talking about the course a lot. Maybe sharing specific course-related tips/stories.

And reminding people that the early bird sale ends soon, and then that if you don’t sign up now, you’ll miss the chance to sign up as it starts Monday, for example. People will feed off your energy, but do make sure there are still other conversations happening, as this makes people more open to the selling.

I was introducing the course by explaining where my experience came from, some examples of my own PR success and then what would be included in the course. I got some sign-ups straight away.

But remember, I’d been sharing pretty much no ‘selling’ content up until that point. My posts were all stories, tips. I was giving stuff away. Now, I sell a lot more so I have to make sure I continue to do a lot of non-selling posts, and then occasionally share one about a new course/membership.

Here’s the first post I shared about my second course, about how to start your own business. 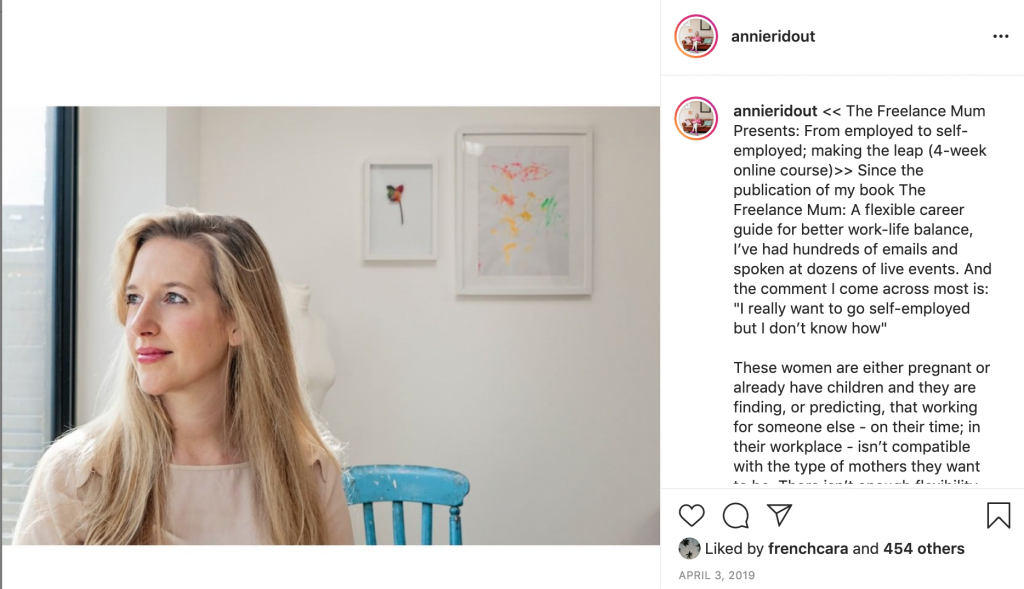 This time, I used the caption to address an issue: women losing their jobs during pregnancy or not knowing if they wanted to return to the workplace after having a baby. That’s what happened to me, which meant I was writing from the heart/experience, and I then showed that there’s another way: going freelance, or starting your own business from home.

So this time, the post was more personal. But it got women thinking: if you can do it, so can I. They just needed to know how. And my course was going to teach them. Again, I sold out pretty quickly.

The next time I launched the PR course, I needed to try something different. So I went in with a quote…. 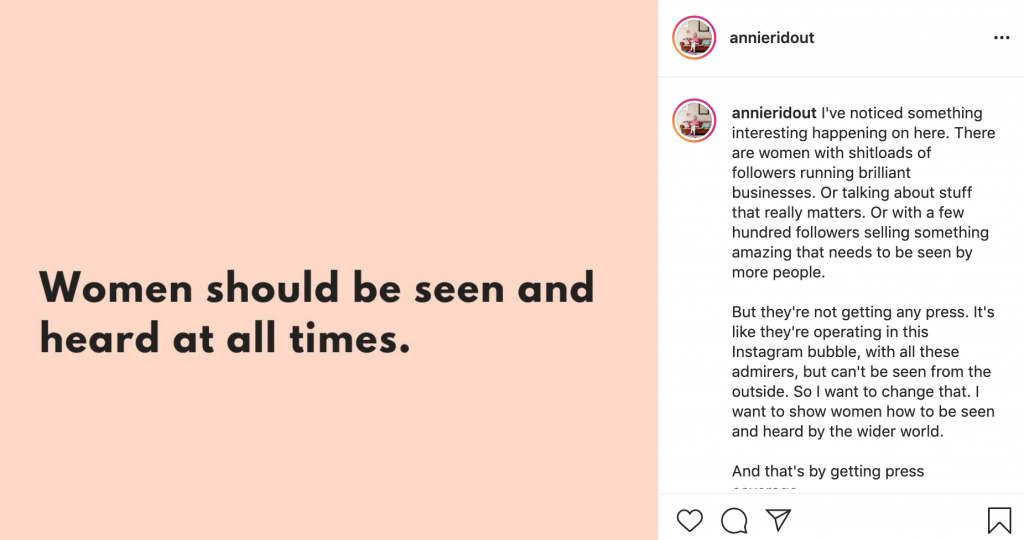 This one had a feminist message. That women-led businesses need to be visible. And this wasn’t my way of using feminism ‘to sell’ – it’s something I truly believe. And that message must have come across, and been inspiring and/or relatable because again, it helped me to make instant sales.

Over time, I’ve seen that my followers engage more if I talk about my online courses in my Stories than on the grid. I get increasingly few ‘likes’ on the grid if the posts are just about a course – it’s ok if I include it as part of a wider, more interesting story – but Stories seem to offend less.

I have a new course.

Draw them in. Make it an actual STORY.

When did you first start designing the course? Why? How did it come together? What gap in the market were you filling? Perhaps you spoke to people who said they really wanted this course? Is there a relevant stat you could include – about why your course is so needed?

Create a story around your course, and divide it up into snappy sentences. Then upload one sentence per Story. Then people can click from one story to the next and feel like they’re on a journey; they’re learning about you and your course.

This makes it digestible and interesting. You are selling your course without explicitly saying: BUY MY COURSE. You are drawing your followers in, inviting them into your mind. Making them care.

But also look at what others are doing. I always love the way Carrie – @mre.soeur – sells her merchandise and one-to-one sessions. It’s casual, part of her general story, and never feels desperate. I’d recommend following her, as she is a great example of how to build a niche, loyal following – who you can then sell to.

When you start selling, tell your followers. Most of us have a rather ‘sheeplike’ mentality whereby if someone else says it’s good, we think it must be. A bit like when you are choosing a restaurant and one’s empty, while its neighbour is full. Which one do you choose?

So celebrate your first sale. And second. And third, fourth, fifth. Tell people. It’s always good to have something exciting going on. This is exciting. Be energised, share the good stuff. And it will very likely persuade your next customer to just sign up too.

If you put out an Instagram post, selling your course, and people respond really well – let’s say you write a little story, and it just resonates – you can rehash that story on all your platforms. Likewise, if you write a blog post that gets traction, or an email that lots of people reply to saying: this is so good!

I wrote a story in an email, about expensive hand-soap and how for a long time, I couldn’t ever imagine being able to afford it. And suddenly remembering this, as my Aesop soap order arrived. People liked it, and bought my bundle of courses after reading it, so I put it in a blog post, too.

To conclude this topic…

If you want to sell on Instagram, you need to think of it as part of your strategy, not the whole thing. So put out the occasional post about your course, and talk about it in your Stories, but do this alongside blogging, tweeting, LinkedIn, Facebook ads. Because you want to be popping up everywhere – you and your course – and to engage people on each of the platforms.

But it’s so, SO important than most of your posts and Stories are about your field/industry/niche. The good stuff. The useful stuff. And then just occasionally mention your course. Otherwise people will get sick of hearing about it and unfollow or disengage.